India is a dynamic nation with a deep cultural history that needs to be experienced with your own eyes. Wonderfully different, a feast of sounds, smells and colour, there is nothing quite like India! It is a place that is mesmerising, exciting and at the same time chaotic and bewildering. That's what makes it so special. Travelling to India is a journey for both the senses and the soul. One minute you’re looking out the bus window in awe at the interactions of the locals, and the next you’re contemplating the meaning of life, learning of the origins of Hinduism. Discover just some of the top activities you can do whilst on a holiday to India. 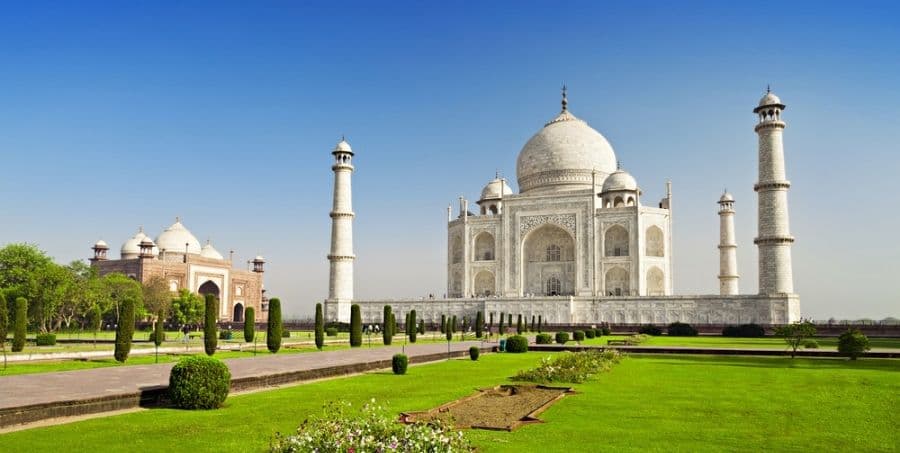 A trip to India isn’t complete without visiting the mighty Taj Mahal! Built in 1560 by Shah Jahan in memory of his Queen, Mumtaz Mahal, to enshrine her mortal remains. This architectural marvel is a visual masterpiece of white marble inlaid with semi-precious stones. It took 20,000 men 22 years to build India’s most well-known building. The Taj Mahal receives up to 80,000 visitors per day at the weekends, making this stunning mausoleum the most popular tourist site in India for international and domestic tourists alike. You can visit the Taj Mahal on our Splendours of Delhi, Taj Mahal & Rajasthan holiday. 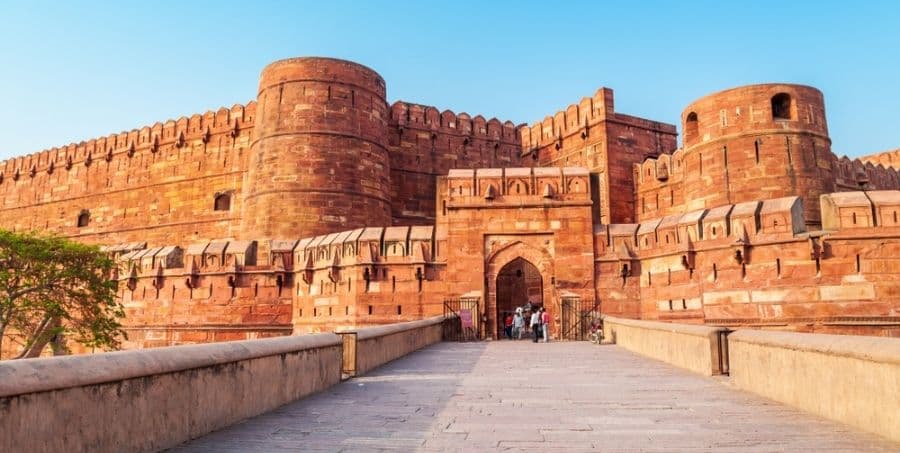 Agra Fort, often referred to as the Red Fort, is the former imperial residence of the Mughal Dynasty located in Agra, India, but it can be more accurately described as a walled city. It contains a maze of buildings that form a city within a city, including vast underground sections. Construction of this massive red sandstone fort began in 1565 by Emperor Akbar, and today it is classed as a World Heritage site. Over the years, further additions were made to Agra Fort by Akbar’s grandson Shah Jahan, using white marble with beautiful ornate carvings. The fort was built primarily as a military structure by Akbar, but Shah Jahan transformed it into a palace. During our visit, we entered Agra Fort through the Amar Singh Gate. Lying on the banks of the Yamuna River, the balconies of Agra Fort give clear views of the Taj Mahal, which is about 2.5kms in the distance. It is rumoured that Shah Jahan died in a marble tower overlooking the Taj Mahal, the monument he had built in honour of his beloved wife Mumtaz Mahal. 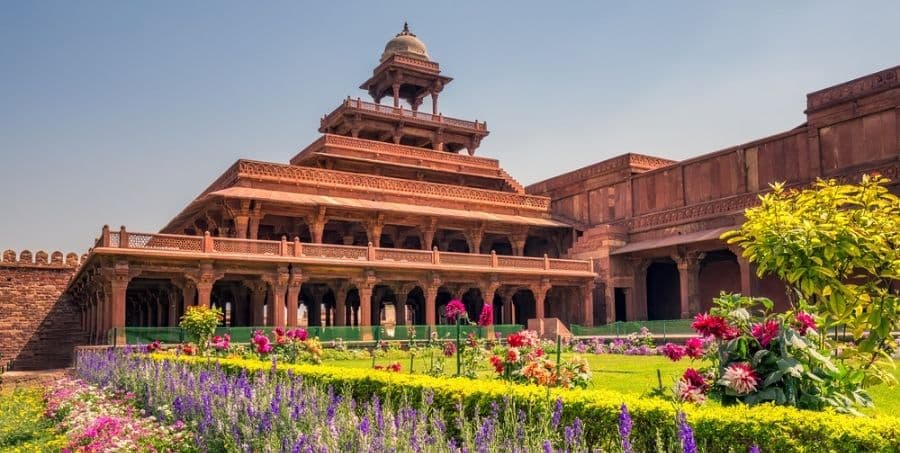 Near Agra lies the stunning city of Fatehpur Sikri. This red sandstone palace complex was built by Emperor Akbar in 1569, in honour of the great saint Sheikh Asalim Christi who prophesied the heirless Akbar with the birth of three sons. Fatehpur Sikri was occupied as the capital of the Mughal Empire for 14 years but it eventually became deserted mainly due to the scarcity of water. I thought Fatehpur Sikri was eerily beautiful, as we wandered through the many vacant courtyards and abandoned buildings. Lying in the middle of the jungle, this 'Ghost City' is extremely well persevered, and is the perfect example of the splendour and grandeur of this Mughal empire at the height of its power. 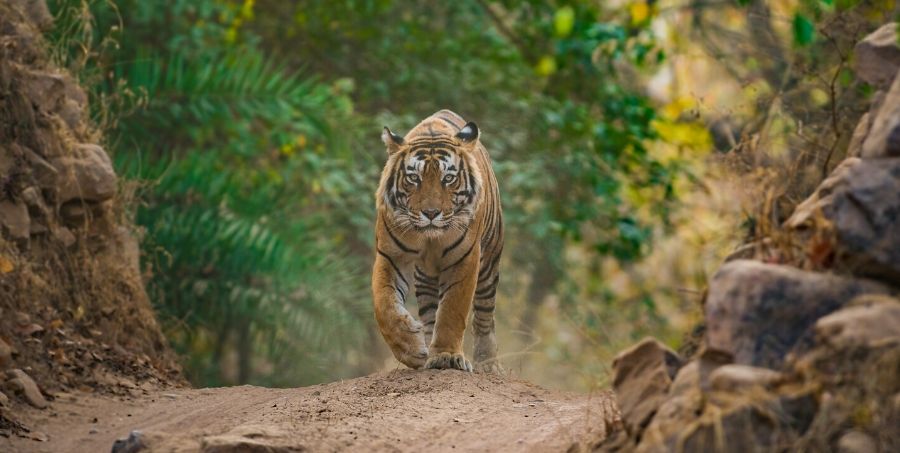 A former hunting ground for the Maharajas of Jaipur before India’s independence, home to ancient forts and one of the ideal places in India to go on safari to see the elusive Tiger. Ranthambore National Park is one of the finest tiger reserves in the country under Project Tiger. Tigers roam freely here along with other exotic wildlife. Visit Ranthambore National Park on Travel Department’s holiday to India’s Golden Triangle.

Take a rickshaw ride through Delhi 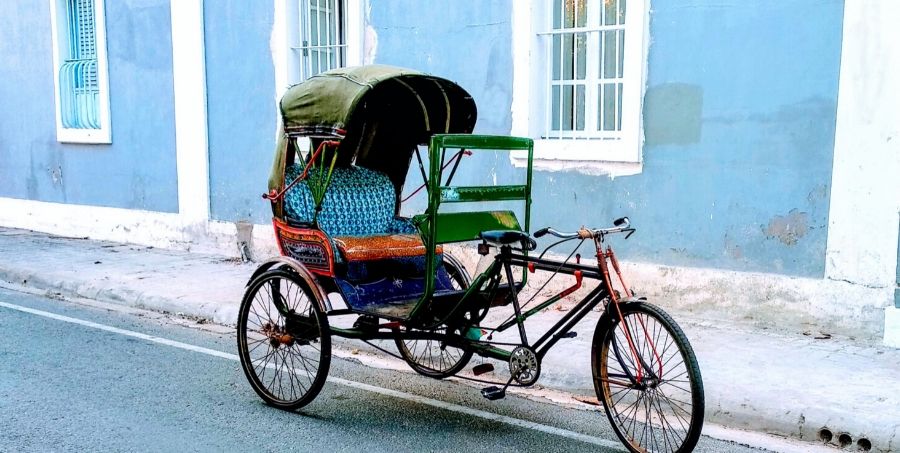 An exhilarating and unique way to explore the sights and sounds of Delhi. Wind through the labyrinth of lanes of the “moonlight place” glimpsing at tiny shops with spices and trinkets, watching every day life around you. 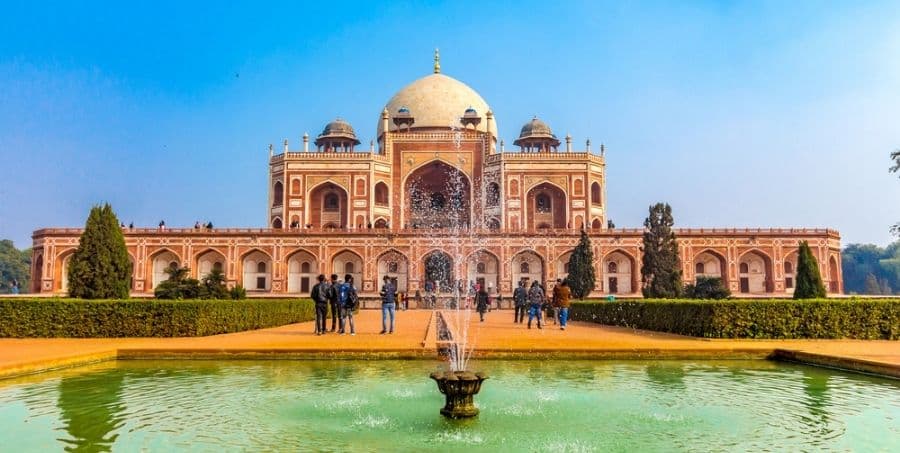 The resting place of Mughal Emperor Humayun resembles a luxurious palace rather than a tomb. Located in the eastern part of Delhi, Humayun’s tomb is one of the best preserved Mughal monuments as well as the first example of Mughal architecture in India. The architecture of the tomb is strongly influenced by Persian design, evident in its arched alcoves, corridors and the high double dome. This tomb was also the first garden tomb of its kind in the Indian sub-continent. The garden was divided into four quarters by flowing water to simulate the paradise garden described in the Quran. The main building is constructed from red sandstone, while the tomb itself is made of yellow and black marble, crowned with a white marble dome. Often described as the predecessor to the Taj Mahal, Humayun’s Tomb inspired the most famous monument in India, which was built almost a century later by Humayun’s great-grandson Shah Jahan. 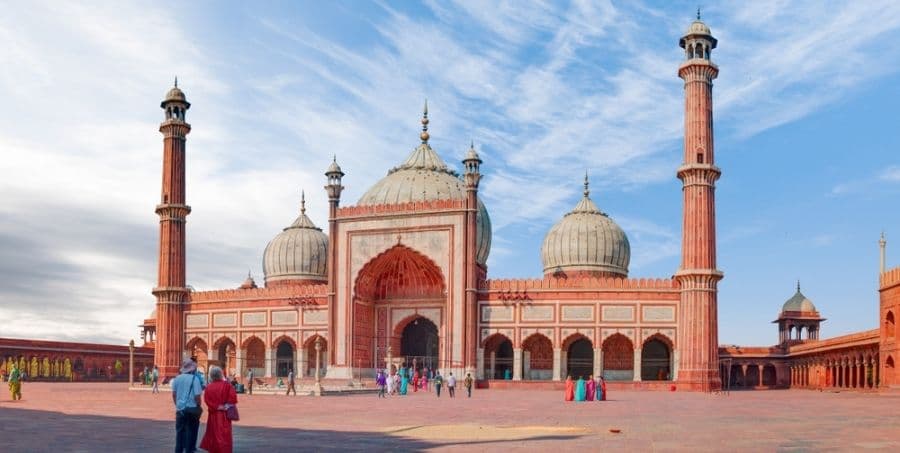 The Jama Masjid of Delhi is one of the largest mosques in India. A calm respite from the surrounding chaotic streets of Old Delhi, Jama Masjid can hold up to 25,000 people for prayers in its courtyard. It was Shah Jahan’s final architectural work of art, built between 1644 and 1658. Jama Masjid has three gateways with scalloped arches, four angle towers and two minarets standing 40m high. It was constructed from red sandstone, which was hand carved in Agra, as well as white marble. Decorative writing gives history to the building and it is still a place that is actively used by Muslims today. The floor plan of the mosque is covered with white and black ornamented marble to look like a Muslim prayer mat. When you visit, you will be asked to remove your shoes and to wear special colourful gowns before entering the mosque as a sign of respect.

Relax on the beach in Goa 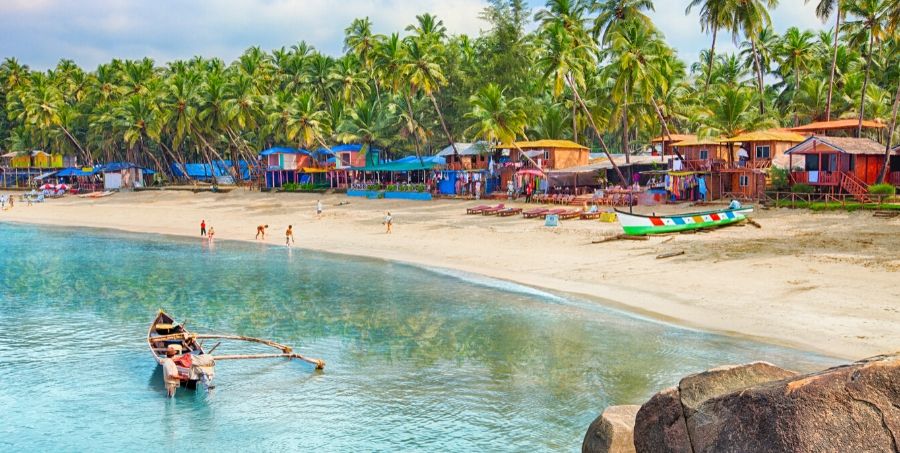 Goa, is a sun-soaked state famous for its beaches, seafood and laid-back tropical atmosphere. Relax on one of Goa’s many golden sandy beaches and admire the unspoiled, palm-fringed coastline. 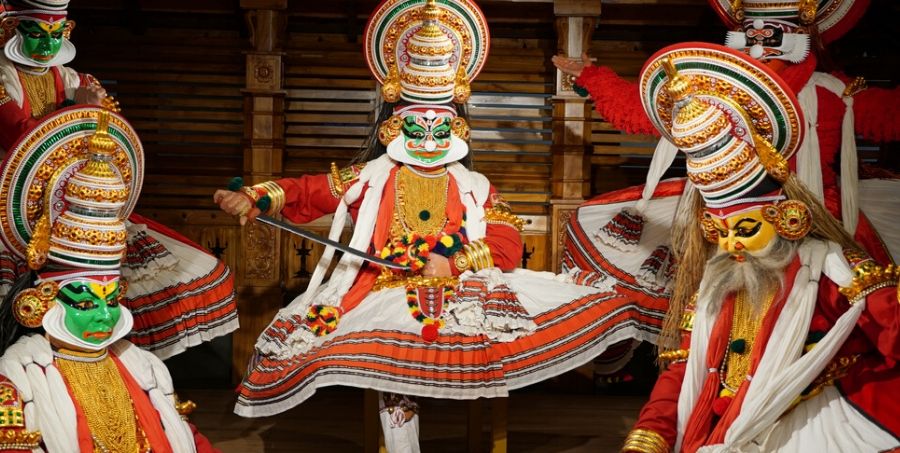 One of the oldest forms of theatre in the world, Kathakali is a classical Indian dance performance characterised by subtle gestures and facial movements. Combined with elaborate makeup, flamboyant costumes and dramatic music the resulting performance is an intense and theatrical interpretation of traditional folk stories. 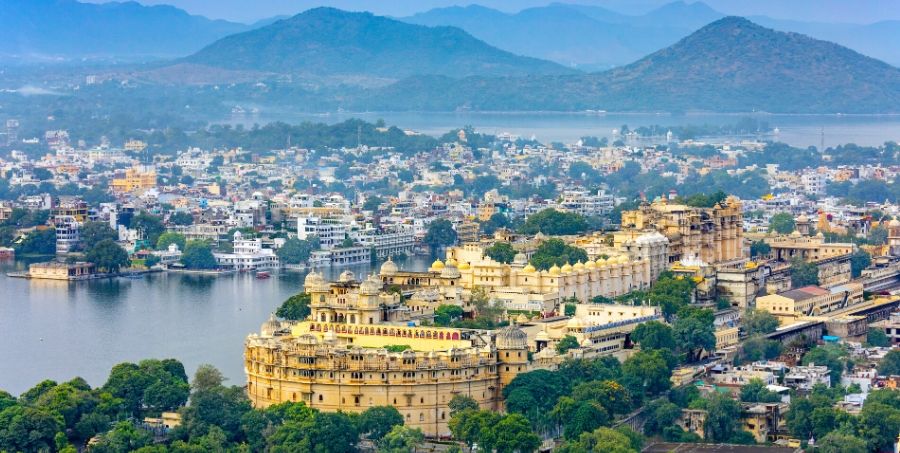 Udaipur is known as the “Venice of the East” and it's a remarkable city built around Lake Pichola. The floating palace is featured in James Bond’s ‘Octopussy’ and visitors can enjoy a boat cruise on the serene and beautiful Lake Pichola. 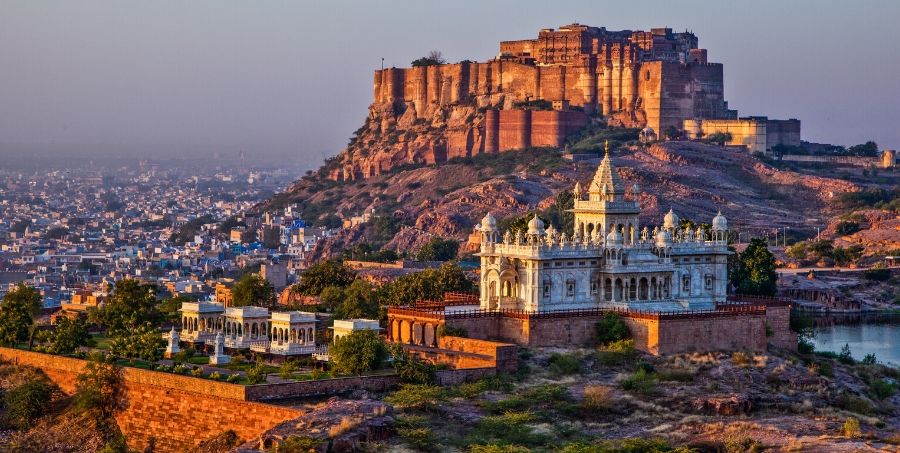 Jodhpur, the home of the Rathore rulers of the princely state of Rajasthan. The Mehrangarh Fort, an imposing structure sitting on a hill, which was used as a filming location for ‘The Dark Knight Rises.’ Jodhpur, the second largest city in Rajasthan and is sometimes referred to as the 'Blue City' due to the brightly painted houses around the Mehrangarh Fort. 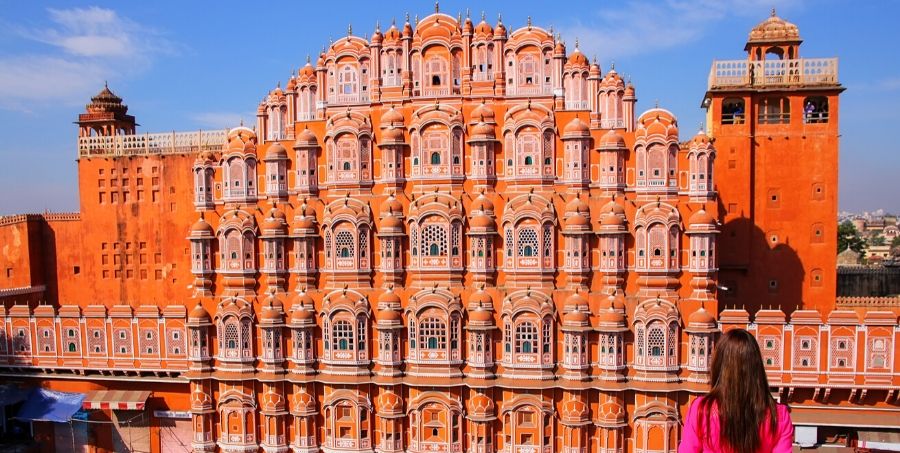 Jaipur, known as the Pink City because of its painted stone buildings, is a lively and bustling place and is the capital of Rajasthan. Visit the City Palace Museum to see the beautiful former seat of the Maharaja of Jaipur, see the awe-inspiring Jantar Mantar sundial, and Hawa Mahal, also known as the ‘Palace of Winds’.

Amber Fort & Palace is a classic, romantic Rajasthani Fort Palace. Constructed by Maharaja Man Singh, the commander of Akbar’s army, it was largely motivated by its highly defensible location. Perched on top of a hill overlooking Maota Lake, the rugged, time-ravaged walls of the Fort may not look beautiful from the outside, but the interior is a visual paradise. Built in the early 1600s, Amber Fort & Palace is home to the stunning Hall of Mirrors. A beautiful collection of over one million pieces of glass mirror tiles, as well as coloured glass, adorn the walls and ceiling. Around the palace, there are carved panels and paintings on the walls depicting hunting and war scenes, as well as festivals. Precious stones are embedded into the plaster in the Hall of Victor. Amber Fort & Palace is known for its artistic Hindu style elements, along with its large defensive walls and series of gates and cobbled paths. 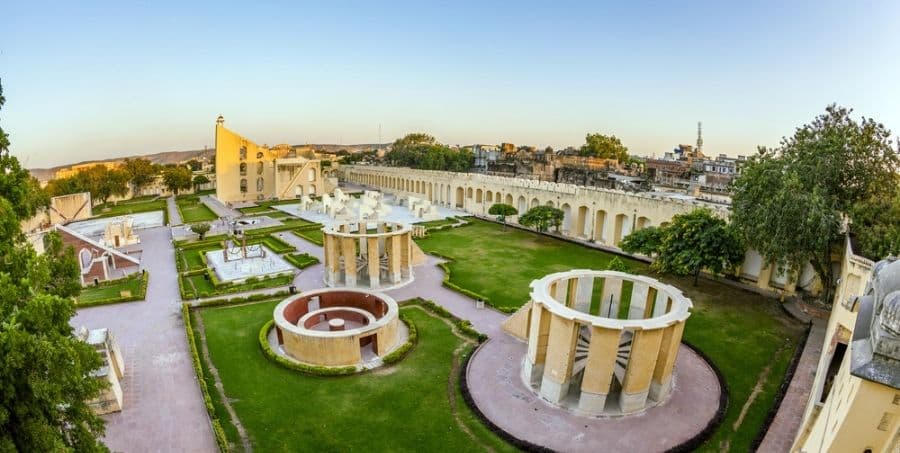 The Jantar Mantar in the city of Jaipur, Rajasthan, is a collection of nineteen architectural astronomical instruments, built by the Rajput King Sawai Jai Singh in 1734. It features the world's largest stone sundial and has gained recognition as a UNESCO World Heritage site. Jantar Mantar expresses architectural innovations, as well as the coming together of ideas from different religious and social beliefs in 18th century India. The numerous masonry, stone and brass instruments allow the observation of astronomical positions and there are also instruments for predicting eclipses and tracking the location of major stars as the earth orbits the sun, as well as monuments for each of the zodiac star signs. 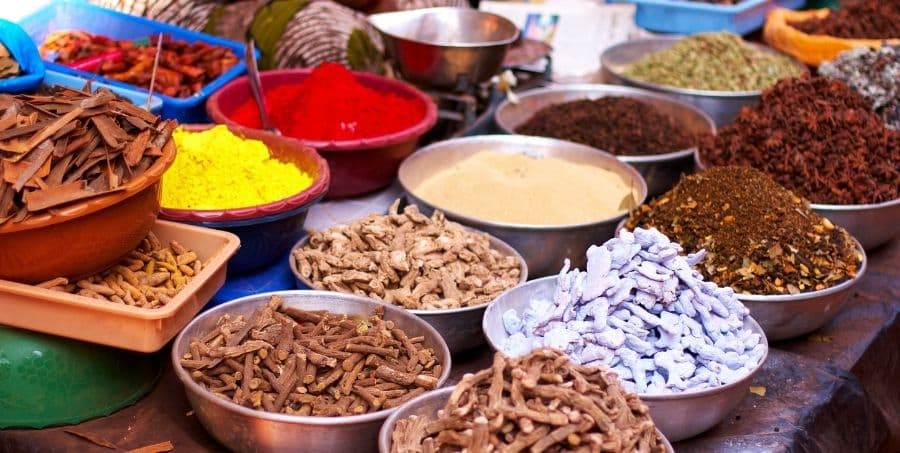 The food in India is just as colourful as its history. Dishes are rich, varied and brought to life by the use of herbs and spices. Food is an important part of Indian culture, playing a hugely significant role in everyday life. While Indian cuisine varies from region to region, reflecting the varied demographics of the country,  one of the staple foods for the layman in India is a simple potato curry and bread - a humble, comforting dish. During a trip to Northern India, you will have ample opportunity to try many dishes typical of the region. Most hotels provide excellent buffets with a range of vegetarian and non-vegetarian dishes. With naan breads made fresh to order by the chefs, your dinner times in India will be a delicious feast. There is also lots of tasty street food in India but is generally only for those with a strong stomach.

India is the exotic, the unknown and the outstandingly beautiful. Discover all our holidays to India to visit incredible architectural wonders and see more of this dynamic country.   All of our India tours include return flights, transfers, accommodation, exciting excursions and the services of expert local guides. 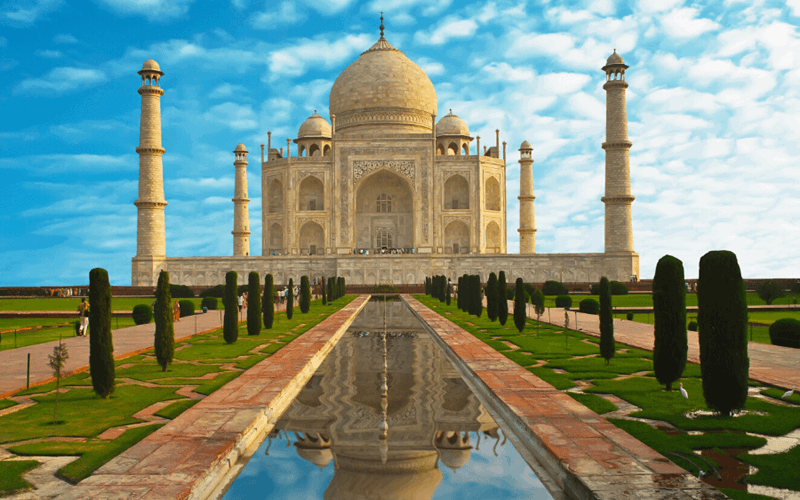 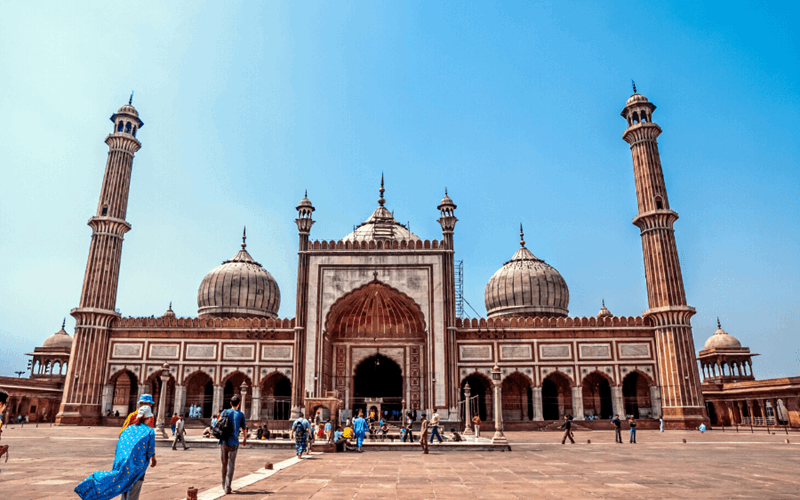 The Golden Triangle is a classic introduction for any visitor to India. However nothing could have quite prepared me for the fascinating array of sights, smells and colours I would experience on my wh ... 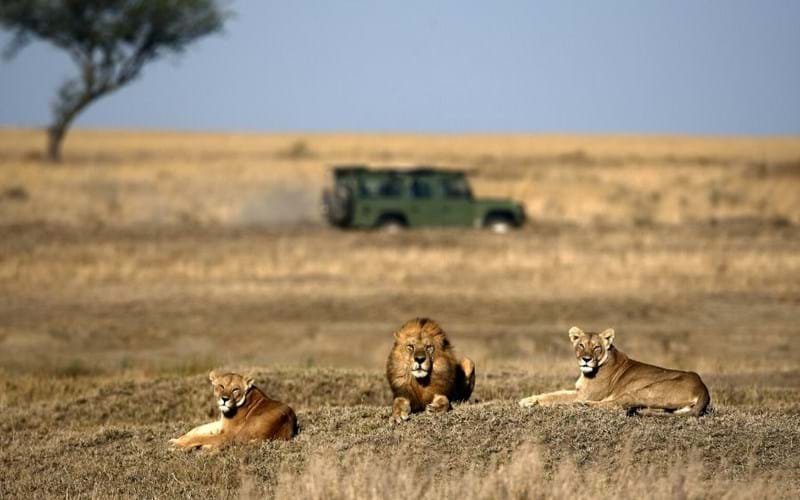